2020 Special Session – A Chance For Reform

This Wednesday the 8th, Nevada will convene for a special session to address the budget shortfalls caused by the Coronavirus. While we don’t yet have a clear idea of what level of cuts schools may face, there is no doubt our students may be impacted, as K-12 makes up one third of the state’s budget, which is facing an $800 million shortfall.

So far it seems the Nevada Legislature is intending to tap into $400 million of its rainy day fund, but that still leaves another $400 million of cuts in an already low-resourced state. 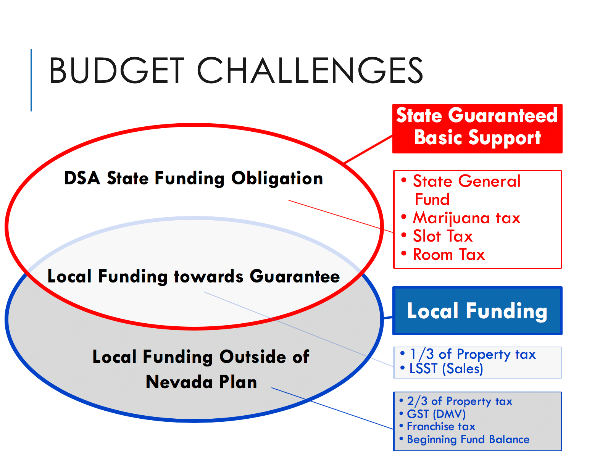 So, even as the state makes an effort to reduce budget cuts and use money from the rainy day fund, schools may still be impacted by lower than expected local taxes.

State’s like California and Arkansas have actually committed to not making cuts to education, while Utah and Maryland have actually proposed increases for schools to help with the additional costs of online and blended learning situations confronting schools.

While it is naive to assume that Nevada can proceed without making cuts to its budget, we urge the legislature to address the modifications to the budget with Nevada’s most vulnerable people at top of mind, this includes students who have already likely fallen behind and confront another troublesome and unconventional school year.

The truth is that even to proceed with a limited year of in-school learning, costs will increase for things such as cleaning supplies, additional technology resources and bridging the Wifi divide, along with new supports for on-line learning. Clark County School District has already said that any cuts to its budget will put even partial school reopening plans at risk and could cause schools to be virtual only.

This special session seems especially familiar to the one during the 2008 recession that focused on budget cuts and was followed by another special session of cuts in 2010. These special sessions give us an understanding of where Nevada’s priorities lie.  Even the 2013 special session found small relief, not by raising revenue, but by extending sunset taxes, Nevada met for a special session three more times after that to give tax breaks or fund projects like Tesla, Faraday and the Raiders.

So much about the future of Nevada and the world is unknown but we hope our legislators and the community understands the severity of this situation enough to address the shortcomings and volatility of our revenue structure and explore new and more stable resources. ENN stood with more than 75 other organizations in a letter to the Governor urging him to begin the difficult but necessary conversation around our state’s antiquated tax structure, while also protecting those most vulnerable in our communities.

Yes, Nevada is one of the hardest hit states but it is for that same reason that we must invest in our students so that we can diversify our economy to avoid such deep swings in our financial infrastructure every time we face economic challenges.

Even if we escape this special session with less damage than expected, there is still much that isn’t known about the following fiscal year, especially with no rainy day fund left to tap into.

Educate Nevada Now and its allies will be monitoring the special session and any cuts to our K-12 public schools. We will also be advocating for this experience to lead us to real reform of our revenue structure, so that we can rise from this situation as a stronger and more stable Nevada.