Looking beyond the headlines and soundbites

As the dust settles from the 80th legislative session and students across the state have started the 2019-20 school year, districts are facing the realities of their funding.

Although the legislature celebrated what they dubbed “ the largest education budget in history” that increase did not trickle down to all districts; either because the per pupil DSA (funding for the general budget) came back lower or because a large portion of funds were provided as restricted funds known as categorical or grant programs.

Educate Nevada Now analyzed the budgets of the majority of school districts in the state to understand the impact of the funding appropriations for Nevada public school students.

After looking at the final budgets for the 2019-20 school year we found that of the school districts whose information was available, 11 out of 15 school districts saw a decline in their overall funding.

And although state legislators did find some additional money to deliver on the Governor’s promise of raises for teachers, 13 school districts somehow still saw a decline in total revenue from the state while all except one saw an increase from local revenue. 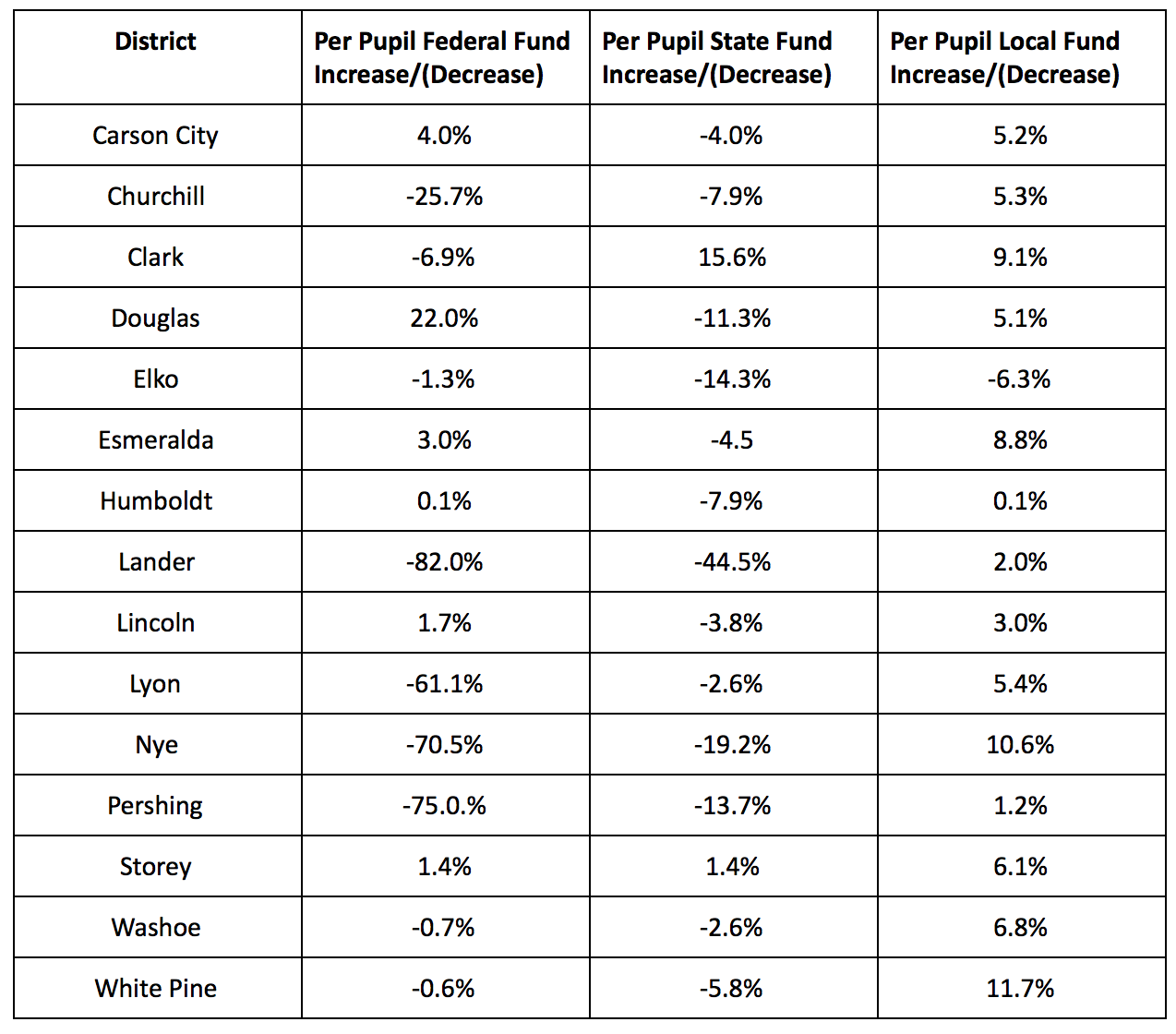 On average across the districts we saw about a 6.8 percent decrease in total state funding per student and an increase in local funding of about 4.6 percent per student. The seesaw between the two funding sources is likely why we don’t necessarily see growth in education funding mirroring the strong  economic growth in the state.

A high percentage of state revenues is classified as restricted or for categorical uses, many of which schools have to apply for and which don’t serve all students with identified needs. Categorical or restricted funds are set aside for specific purposes and cannot be used by school districts to pay for operational costs such as raises, maintenance, technology or books.  This is why funding can “increase” but school districts still need to make cuts. For example, restricted use state dollars per pupil increased by 32% from last biennium while state dollars for general fund use decreased by 6%.

Will the new funding formula fix the funding seesaw?

Not necessarily, the new funding formula will set aside an account or budget specifically for all NV K-12 funds. This will allow more transparency to see what funds make up K-12 revenue but it doesn’t guarantee the state contribution from the general budget will increase in accordance with inflation or with the state’s revenue growth. The requirement for K-12 funds to increase with the growth of the state economy or by inflation was stricken from the funding formula bill at the last minute. So, even if funds from the IP1 Room Tax or Marijuana taxes grow, the state can still reduce its contribution from the general fund to the K-12 budget as it does currently, leaving funding flat or dismal.

Although some teachers were able to get the Governor’s three percent promised raises, not all received it while some received it at a steep cost to their school districts which saw a decline in revenue.

Three school districts still provided an increase despite receiving a decrease in funds.

CCSD, which saw one of the largest per-pupil  increases in funding still had to make $17 million in cuts to realize it’s full compensation package for employees (not including the PGP raise that was settled after the threat of a strike and which will add to the final amount of cuts). 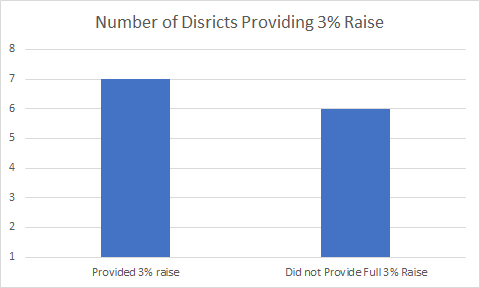 The bulk of the funding increase was consolidated for the 2019/2020 school year, while  funding the legislature designated for the following year (2020-2021) is much more moderate.

This year K-12 received a 4.2% increase but next year the increase will only be 1.5% likely not keeping up with inflation and possibly forcing districts into making cuts to continue their operations.

As the chart below illustrates, despite additional funding like money for marijuana, the state school funding account (the Distributive School Account) doesn’t necessarily increase and in fact has not even kept up with inflation, despite new or additional revenue. 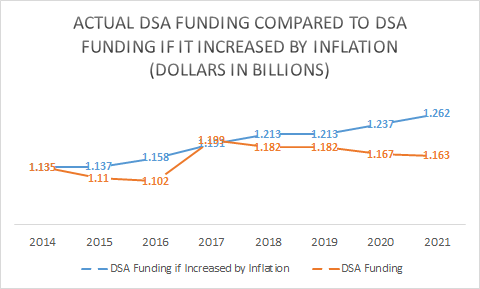 Although legislators made efforts to increase K-12 funds, so much was earmarked to restricted funds or delegated to teacher raises that critical needs such as reducing class sizes, purchasing new textbooks or school equipment were not addressed and will continue to hurt students and school staff. Of course, all expenses are important but limited funds always mean something needs to be sacrificed which is not fair to students or educators and school staff. It also appears that in an effort to follow through on raises for this year the state put so much money up front for this school year ( 4.2 % increase) that it left districts with a much smaller increase next year (1.2%). As a result districts are likely to face additional cuts the following school year. CCSD has already warned of tough times ahead in the 2021 fiscal year as a result.

Ultimately no new revenue was identified for K-12 and this session the legislature voted again to supplant the IP1 Room Tax so that students were denied an additional $400 million in K-12 increases (making the total amount supplanted from IP1 to $1.6 billion). Despite a new funding formula that basically only redistributes funding bringing everyone down to the same level of inadequate funding, there is still no light at the end of the tunnel for adequate education funding and true reform for our schools.