A Quiet Regulatory Change Could Hurt Nevada’s Most Vulnerable Students

The proposed redefinition of “at risk” has effectively undone much of the progress of the new school funding formula. Seventy-five percent of low-income students will no longer be eligible for additional state funding.

Summary:  The new funding formula was supposed to provide additional funds (weights) to all students with unique needs, such as English learners (EL) and at-risk students. The “at-risk” designation originally applied to low income students (those identified for “free and reduced price lunch” or FRL). In 2020, the state made efforts to redefine “at-risk” by selling the idea that income is not the only factor that makes students vulnerable, and other factors should be considered. Both the State Board of Education and the Commission on School Funding supported this effort, which appeared to have the end goal of making the designation more inclusive.

In public comment, ENN expressed concern that this redefinition was simply a way to reduce eligibility and free the state from raising the additional funding needed to fully implement the formula as intended.

Fast forward to 2022, a private company commissioned by the state developed a method that identifies factors for the new designation of at-risk. But in conjunction with the Department of Education (NDE), they arbitrarily limited those factors in a way that the state will conveniently not have to raise new revenue to implement the formula. Students eligible for additional funding dropped from 271,618 to only 66,674  – a 75% cut in students who will now get resources. NDE has also said data used to make this determination is “proprietary” and refused to share how they made the final determinations.

ENN understands that temporarily restricting eligibility may be necessary as the state grows into fully funding weights for all unique needs students. However, this would be a permanent change that will drastically deprive Nevada’s vulnerable students of the supports they need for years to come.  If this goes through, this new funding formula will be more of the same for Nevada. Rather than making hard choices about appropriately funding our schools, the state would once again pull a bait and switch – big promises and big letdowns for some of our most struggling students.

Back in 2019, legislators celebrated their huge victory in passing the new school funding formula, the Pupil-Centered Funding Plan. They sang praises that the formula was finally more transparent, modernized and equitable.

A major component of the formula that would create equity was the weighted funding for students with unique needs. Previously, only about 20% of low-income and English learner (EL) students received additional state funding through the Zoom, Victory, and SB 178 categorical programs. These programs have largely been successful and illustrated that additional money, spent effectively, can positively impact student achievement. The problem? Only students at certain schools received these additional resources causing almost 80% of students with similar needs to be left out.

Weighted-funding aimed to correct this problem. All students identified as at-risk or EL would finally receive additional funding expressed as a weight, or multiplier, to meet their needs. These funds would then “follow the student” down to their school.

There was only one problem, and it was a big one. How can programmatic funding that currently only serves 20% of low-income and EL students possibly meet the needs of 100% of these students?

When the new funding formula was developed, “free and reduced lunch” (FRL) status was the proxy for being eligible for the at-risk weight, a common practice used in many other states to support low-income students. When adjusting for students already receiving a weight as part of another classification (students are only eligible to receive the one, highest weight), 271,618 students qualified for at-risk funding using the FRL designation as a proxy. That is over half the students enrolled in Nevada public schools.

Recent law gave the State Board of Education authority to re-examine the definition of at-risk for the purpose of eligibility for the weight. FRL as a proxy was often criticized for being both overinclusive and underinclusive – overinclusive because some schools that have a significant amount of FRL students simply classify the entire school as FRL for the sake of readily providing free and reduced lunches to all students, meaning some non-FRL students may be incorrectly deemed eligible for the weight. Further, some low-income students may thrive academically regardless of their designation.

FRL has been identified as underinclusive because not all low-income families apply for FRL designation and not all academically at-risk students are low income. High school students’ families often don’t apply for FRL even if they qualify, so many districts see a significant drop in applications as students get older. Further, low-income is not the only factor that may make students academically at-risk. Turmoil at home, transiency, behavior issues, and other factors may warrant additional resources for a student to succeed.

The point of re-examining the definition was advertised as a way to ensure that no students who are at-risk are left behind by the simple FRL definition. This new definition would be more inclusive.

The State Board commissioned Infinite Campus, a data system that can track up to 75 different student factors, to create a new at-risk designation. Infinite Campus worked closely with the Department of Education (NDE) to develop the program.

Both the State Board and the Commission on School Funding applauded the effort in presentations given back in 2020, but the actual eligibility figures were still in development. The new method seemed sound in theory, but the actual application was unknown.

Back then, ENN testified with concerns that the redefinition might simply be an effort by the State to avoid supporting all the students that may need additional resources. Particularly, we were concerned that a new definition would prioritize reducing the number of students eligible for the weight in an effort to essentially “back into” the inadequate funding levels previously allocated under Zoom, Victory and SB 178 programs.

Recently, the at-risk model was revealed, and many of our fears have been realized. Though the model identified reasonable factors in determining eligibility, such as academics, attendance, behavior and stability (including FRL status), the application of these factors appears arbitrary and specifically designed to reduce eligibility.

Only about 67,000 students would now qualify for the at-risk weight from the original 271,000. That leaves out almost 75% of students who were originally intended to receive support under the original at-risk definition. So somehow we went from a formula that only serves 20% of eligible students, to a plan that would have served 100% of these students, back to a plan that would serve only about 25% of eligible students. 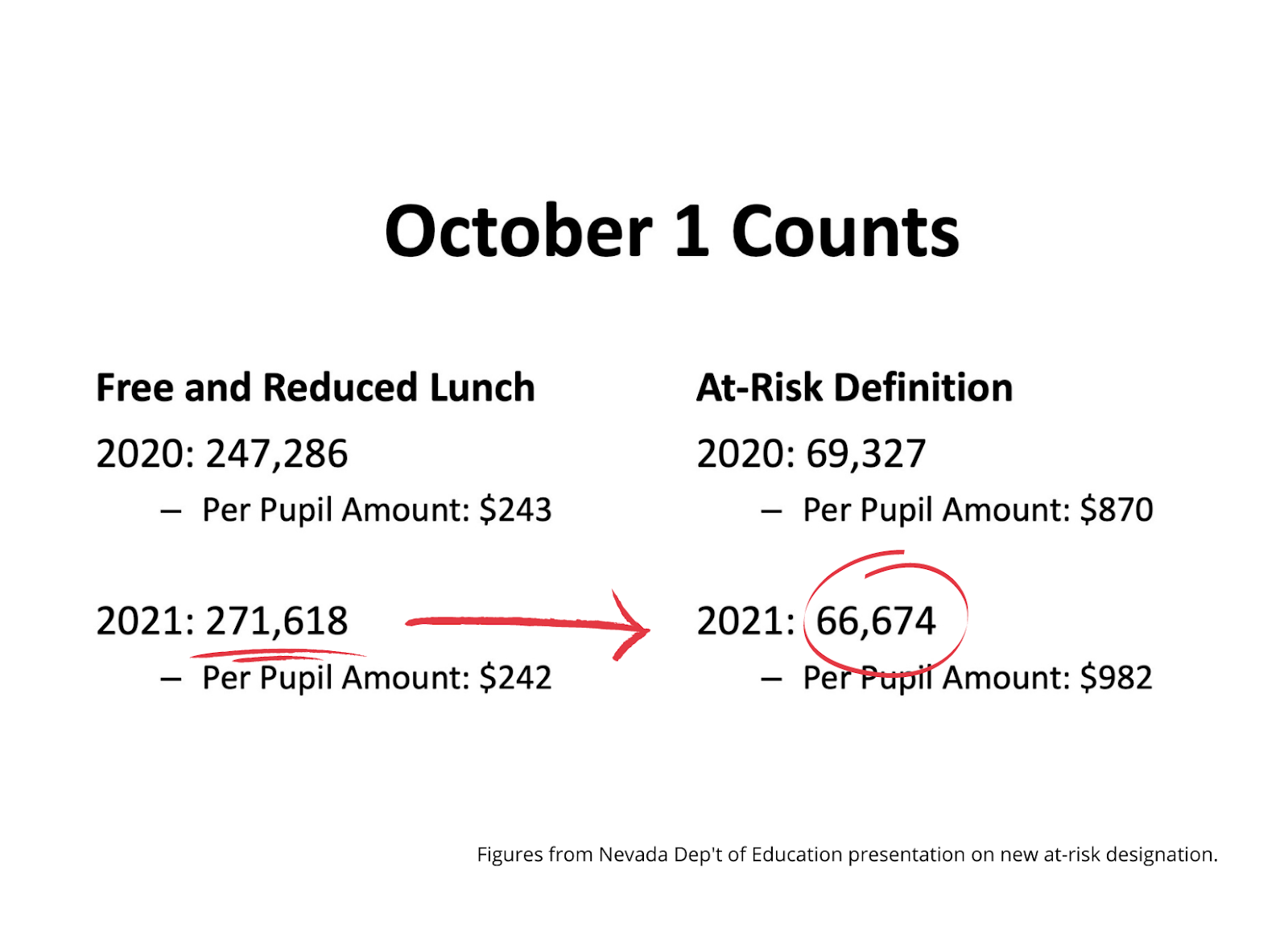 The new, equitable school funding formula that was celebrated for serving all students with unique needs would look more like the old, antiquated formula. However inconvenient for lawmakers, we can not avoid the fact that public education needs big investments to graduate our students ready for college, career and community.

At the March 18 Commission on School Funding meeting, members pressed NDE on why and who chose certain cutoffs for the model’s factors (such as only supporting the bottom 20% in achievement, despite the much greater need). NDE simply stated that information was “proprietary” and solely developed by Infinite Campus. Why are such critical decisions about who is eligible for these resources being developed in secret by a private company? The public deserves to understand why so few students will be served when the vast majority of FRL students are not proficient in core subjects.

Curiously, the graduation rate was given as a reason to exclude eligibility for 75% of FRL students by NDE, since 80% of FRL graduated this most recent year. This is a non-sequitur. First, whether the current graduation rate is 80% has absolutely no bearing on whether a 3rd grader in elementary school needs additional resources. Second, Nevada has some of the worst ACT (college admission exam) scores in the country and some of the highest college remediation rates. As mentioned, only 15% of FRL students are proficient in Math by high school. Coupling this with the fact that there is no longer a proficiency requirement for graduation, the graduation rate becomes an even less impressive measure of student success, and it certainly should not be an excuse to deny vulnerable K-12 students essential resources.

Growing Into a Fully Funded Model

In our testimony at this meeting, ENN agreed that a model like Infinite Campus could be a useful tool in growing into fully funding all students with unique needs. Unfortunately, we simply do not have hundreds of millions of dollars in new investments to fully implement weights at this time, and it may take years to get there. A model could start by targeting the highest needs students and slowly scale up to serve all at-risk students. This could function much like the method identified by the Commission on School Funding to scale up base per-pupil funding over a ten-year period.

However, there is no indication that this Infinite Campus model is temporary. There are no targets being developed or plans to eventually fund all vulnerable students. Seventy five percent of low-income students are simply being left behind, so the State can avoid the uncomfortable truth that Nevada schools are too chronically underfunded to support all truly at-risk students.

The biggest question of all is why on earth did we celebrate this new funding formula for “meeting the needs of all our most vulnerable students” when the weighted funding was simply going to be manipulated to serve a fraction of those students? Originally it was sold as re-identifying a designation to serve more students and provide a wider net, instead more than 200,000 students that were originally going to be considered are now going to be ignored and provided no additional resources. We sincerely urge the public to demand answers. Otherwise, the state will proclaim that it is “now serving all at-risk students” next legislative session, when in fact, they managed another shell game right under our noses.

Tomorrow the Commission on School Funding meets again at 9 a.m., it is unclear whether they will discuss this the At-risk weights as it’s not specifically on the agenda. But you can join ENN and watch the meeting here.