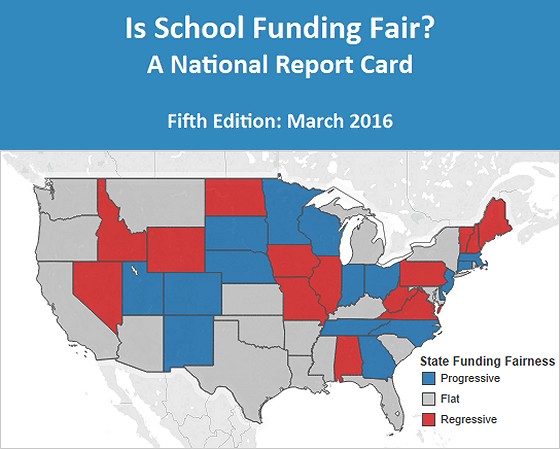 Bottom line: Nevada’s system of public school finance again ranks among the most unfair to students in the U.S.

The Report Card is based on data through 2013, the most recent year available. The State did increase education funding by over $300 million in 2015, largely through one-time categorical grants. It is expected that, given Nevada’s very low funding levels, this increase will do little to alter the chronic underfunding of the state’s public schools.

On the National Report Card, Nevada was awarded an “F” grade in funding distribution, which measures the extent to which the state provides more aid to higher poverty districts than those with lower student poverty. Under the State’s school funding formula, known as the Nevada Plan, high poverty districts receive on average only about 71 cents for each dollar their wealthier counterparts receive. The lack of funding and resources for districts and schools with high concentrations of students in need of additional programs and interventions impedes efforts to improve outcomes.

The overall level of Nevada public school funding is below average compared to other states, adjusted for regional wages, economies of scale and other factors. On this measure, Nevada is in the bottom ten states.

Nevada also receives a failing grade for fiscal effort, measured as the proportion of the state’s economic productivity that is invested in public education. More troubling, the State’s investment effort has decreased 3% from the prior year.

“This Report Card once again shines a light on how the funding of Nevada’s public schools shortchanges students, especially those at-risk due to family and neighborhood poverty,” said David G. Sciarra, Executive Director of the Education Law Center and a co-author of the National Report Card. “The results also confirm that the Nevada Plan – the state’s outmoded funding formula – does not deliver the teachers, support staff and other resources necessary for a high quality education. We hope the Report Card results will serve as an urgent wake-up call for lawmakers to put school funding reform at the top of the education agenda in the 2017 legislative session.”

“The Report Card makes clear that public school children need every dollar the Nevada Legislature currently allocates for their education in the biennium budget,” said Sylvia Lazos, Policy Director of Educate Nevada Now, powered by The Rogers Foundation. “This is why ESA vouchers pose an urgent threat to public education in Nevada, because they will divert millions of dollars from already stretched and insufficient public school budgets to private schools and other private uses, depleting the resources essential to afford every student the opportunity to succeed.”

First issued in 2010, the National Report Card is based on the principle that predictable, stable and equitable systems of school funding are an essential precondition to equal educational opportunity in the 50 states. This foundation is also essential to building and sustaining efforts to improve opportunity and outcomes in our nation’s schools. To meet state and national education goals, states must design and implement finance systems that provide sufficient funding that is fairly distributed to account for the needs of students, which are higher for low-income students, English language learners, and students with disabilities.