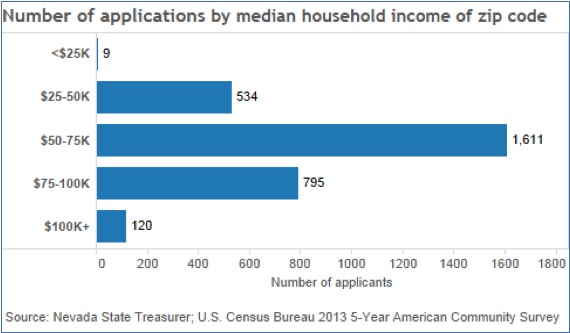 The striking variation in family interest in vouchers is evident when examining application rates, which steadily and dramatically increase as median household income increases. ENN estimates that the State received about 29 applications for every 1,000 school-aged children in Nevada’s wealthiest areas, compared to only one application per 1,000 children in the poorest areas.

This is anticipated, given the high costs of most private school tuitions, the difficulty posed by the lack of transportation to these schools, their exclusionary admission requirements, and other issues that make ESA’s impractical for low-income families. 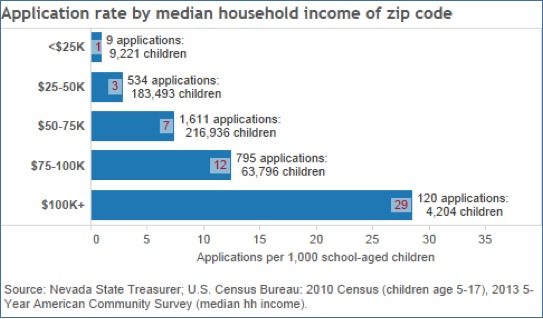 “The data confirms that the voucher law will drain funding from our public schools to subsidize private school tuition for wealthy families,” said Sylvia Lazos, ENN Policy Director. “The data also makes clear that, despite the claims of proponents, vouchers won’t help Nevada’s poorest school children, who will continue to attend public schools, but with fewer resources to meet their needs.”

In June, the Nevada Legislature enacted Senate Bill 302, which authorizes the most expansive voucher program in the nation, funded by diverting resources from Nevada’s public schools. In September, six public school parents filed a lawsuit challenging the voucher program as violating the Nevada Constitution’s express ban on the use of public funding for private school tuition or other private expenses.

Educate Nevada Now (ENN), a campaign of The Rogers Foundation, assembled a team of experienced Nevada and national attorneys to ensure that Nevada law protects and advances education opportunities for all children. The six parents are represented pro bono by Tamerlin J. Godley, an attorney, and associates from Munger, Tolles and Olson, attorneys David Sciarra and Amanda Morgan of the non-profit Education Law Center (ELC) in Newark, NJ and Las Vegas, a Rogers Foundation partner, are representing the students and parents. Justin Jones, attorney and associates from Wolf, Rifkin, Shapiro, Schulman & Rabkin LLP in Nevada, also represents them pro bono.